Brush Up Your Ice Cream Lingo

Ice cream season is starting and we’re ready to scoop up plenty of treats for you! From our Frappes to Ice Cream Sandwiches, we have a wide selection of ice cream indulgences to choose from; but do you know which is which? Is a Frappe the same as a Milkshake?  What exactly is a Banana Split?  It’s time to test your knowledge of the ice cream classics—use this guide to brush up your ice cream lingo (and history) in time for ice cream season! First up is the Ice Cream Float, a frothy drink consisting of ice cream and soda. It is most commonly made with two scoops of vanilla ice cream and root beer poured over, AKA a Root Beer Float. But it doesn’t have to contain root beer to be considered a float, it can be made with any flavor of soda and any flavor of ice cream. Here at Chill, we make it with root beer, Sprite, Coke, or orange soda and any of our 32+ flavors of locally-made ice cream.

You can also order a Hot Ice Cream Float in our shop. We modeled our Hot Ice Cream Floats after the Affogato, a popular Italian dessert which is made by pouring a shot of espresso over a scoop of ice cream. We can also make a Mocha Float, a Hot Chocolate float, or a Hot Apple Cider Float (seasonal) in addition to an Affogato. If you haven’t tried one yet, we definitely recommend it! Ah, who else loves a good ol’ Frappe? A Frappe (pronounced “frap”) is an ice cream drink made of blended milk, ice cream, and syrup, and they originated right here in New England! It’s sometimes called a ‘frosted’ or a ‘milkshake’ depending on where you are in the U.S. but here at Chill we call it a Frappe.

In Massachusetts, a Milkshake is historically known as a drink made by shaking milk and flavored syrup together until it becomes foamy; it does not contain ice cream. Now, that may sound just like chocolate milk, but the difference is that chocolate milk is made by stirring the two ingredients (we New Englanders are pretty picky when it comes to our ice cream treats).

So, when you walk into Chill on Park and ask for a Milkshake, we’re going to double check with you and ask if you want a Frappe, because we want to make sure we get your order exactly the way you want it. 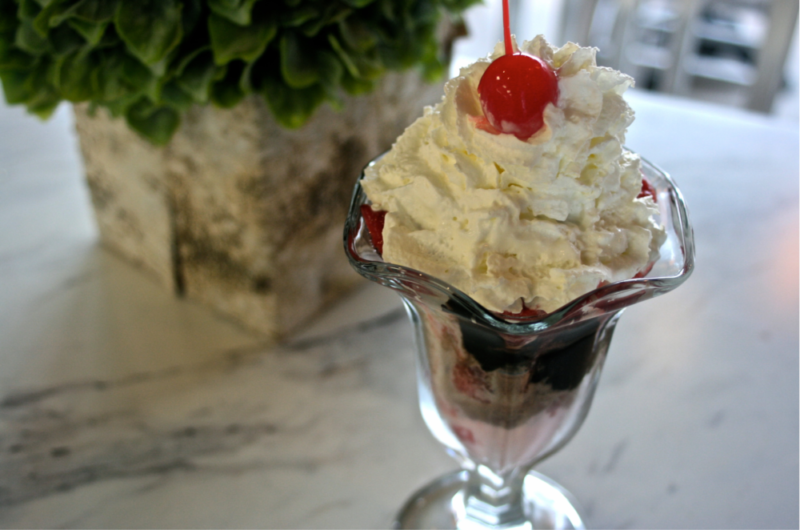 There are two stories of how the Ice Cream Sundae came to be: one says the sundae originated in Ithaca, New York; the other claims it was in Two Rivers, Wisconsin. The two cities are so intent on being the “Home of the Ice Cream Sundae,” that their mayors have been arguing about it since the ‘70s.

Well, wherever it came from, we’re glad it exists! At Chill on Park we consider a classic Sundae to be made with two scoops of vanilla ice cream, hot fudge, whipped cream, chopped nuts and a cherry. But, like all our treats, we can customize your Sundae with whichever flavors and toppings you would like.

You can even upgrade to a Brownie Sundae for a small upcharge. It’s just like a classic Sundae, only served on top of a warm, chocolate brownie. We can also serve your Sundae on a warm slice of coffee cake instead. And if you’re looking for a super upgrade, we also serve one of the most famous Ice Cream Sundae options around: The Banana Split. A Banana Split is traditionally made with one scoop of chocolate, one scoop of vanilla, and one scoop of strawberry ice cream nestled in between two slices of a banana. It is served with hot fudge, whipped cream, nuts, and a cherry, but like all ice cream treats we make, can be customized to your liking. And much like the origins of the Ice Cream Sundae, this treat has a bit of a rivalry too. The first Ice Cream Sandwich is said to have been made with vanilla ice cream and graham crackers. It has since transformed into what we know of today: the cookie sandwich. You’ll find Ice Cream Sandwiches made using all types of cookies ranging from chocolate cookie bars to chocolate chip cookies to specialty, small batch cookies. We hand-make these in our shop, and can roll them in toppings, like sprinkles, for a small upcharge.

Now that we’ve sorted through the different types of ice cream treats and how they came to be, which one will you try first? If you need help, our staff is always happy to offer suggestions based on what you like.

Give us a call at (617) 297–5401 for more info on any of our treats. Want your favorite Chill on Park treats delivered right to your door? Visit our website at www.chillonpark.com and click the Order button in the upper-right corner!